For decades, the Algonquin College Learning Centre has been a leader in continuing education, providing resources for those looking to up their skills after entering the workforce.

Ready to expand their offerings as well as their space, the school left its former home on Albert Street for 700 Sussex Dr., hiring architecture and design firm Provencher_Roy to bring its vision to life.

When the firm began its work, 700 Sussex Dr. was still home to a gym and hair salon. Underneath the matted flooring and heavy plumbing, Anna Westlund – a partner and interior designer at Provencher_Roy – could see a “beautiful architectural shell,” with limestone columns and natural light flooding the space. 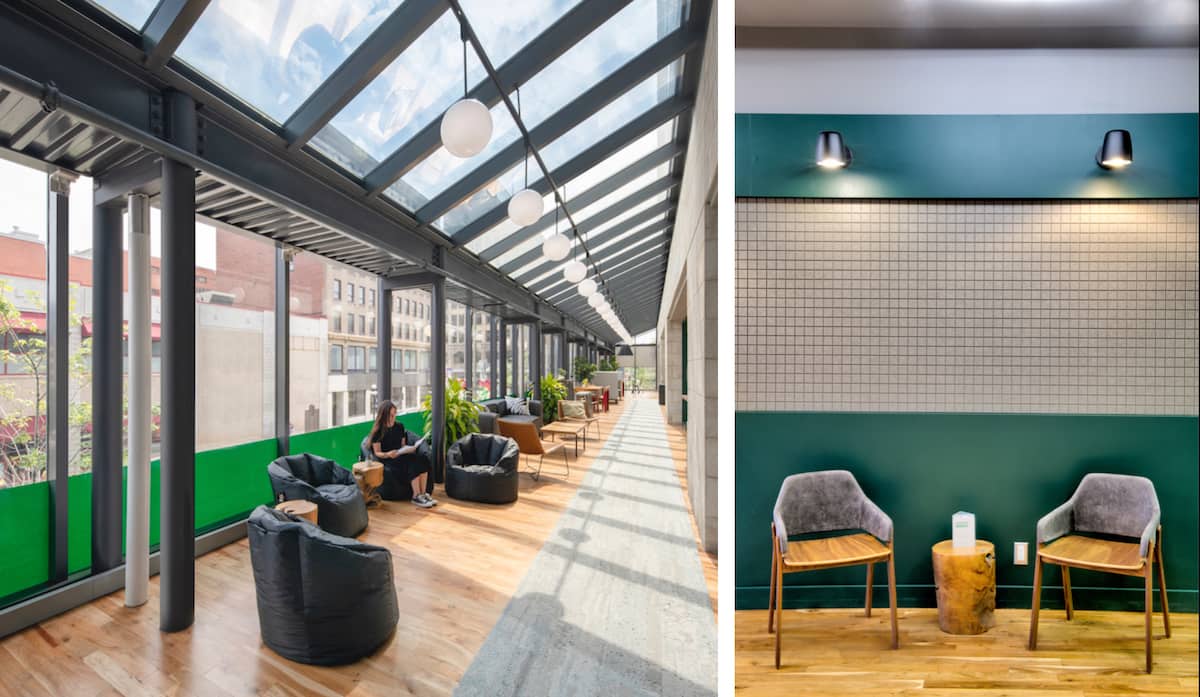 To zero-in on its client’s wishes, Provencher_Roy held two workshops, asking the Algonquin team to imagine their new space. Words such as “memorable,” “nature,” “community” and “inspiring” arose.

“They really wanted to reinvent what the centre was,” Westlund says.

After a one-year renovation project, the centre opened its doors in January 2020. The 8,800-square foot training facility holds several dynamic classrooms and collaborative spaces, with a palette of greens hinting at Algonquin’s brand colours.

“Learning environments are critically important,” says Kathyrn Leroux, the Algonquin College Learning Centre’s acting executive director for business development. “To be able to transform the space into a collaborative, living space was really quite exciting.”

The Algonquin College Learning Centre sits on the second floor of 700 Sussex Dr., on the edge of the ByWard Market. When entering the facility, the first thing learners see is the main reception – a sleek, contemporary area with rocky grey hues and a subtle feature wall.

One section of the ceiling is covered with a wood veneer, lined with a row of spotlights. Wrapping behind the reception desk, the rhythm of the veneer bulkhead represents a canoe, honouring the history of the Algonquin Anishnaabeg People. Additionally, all graphic signage in the centre is written first in Anishinaabemowin, and then in English.

Walking down the bright corridor, learners are met with the centre’s defining feature: the atrium. Inviting couches and booths line the glass, creating opportunities for solo work or collaborative sessions.

“I will take calls out there, cozying up in the corner,” says Leroux. “It’s just perfect.”

As a nod to the centre’s neighbourhood, Provencher_Roy created custom lighting: white, suspended globes that gently illuminate the space.

“They’re inspired by the lamp posts that are all over the ByWard Market,” Westlund explains. “They’re dimmable, to be flexible during different events.”

Parallel to the atrium are state-of-the-art classrooms, which can hold up to 100 people. Investing in its learners, the centre offers ergonomic setups with large, high-definition screens and leading-edge connectivity.

“People want to be in spaces that encourage them, that give them the inspiration to do their best work. The Algonquin Learning Centre is definitely that kind of space.”

The classrooms are split with seafoam-green, flexible floor-to-ceiling walls. In one seamless movement, the space can switch from three intimate learning spaces into one large networking venue.

“The wall separators are actually whiteboards,” Leroux adds. “As classes unfold over the course of a few days, they get filled with ideas.”

Back in the atrium, one end of the space boasts a chic hospitality and kitchenette area. Leroux recalls that, at the centre’s previous location, learners would file out of the building for lunch.

“Now, classes break, and there’s clusters of people everywhere,” she says. “They’re staying in the facility – that speaks volumes to how comfortable it is.”

To be more climate-conscious, the centre uses china cups and reusable dishes.

“The plant life in the space is all real, too, and that lends itself to a much more calming environment,” Leroux says.

Westlund is a big believer in this phenomena too, calling it “biophilic design.”

“People feel and perform better when they’re in environments that either mimic aspects of nature, or have natural features,” she says.

Rising to the challenge

Reimagining the space at 700 Sussex Dr. was no small feat – Provencher_Roy had just a few months to complete their design work so construction could finish before the centre’s former lease ran out.

“There was tons of demolition and lots of reworking the interior space,” Westlund says. But thanks to a detailed pre-lease planning exercise and the two client workshops, the firm was crystal-clear on its client’s vision, and hit the ground running.

“Anytime you’re renovating an existing space, you have to be fluid,” Leroux says. “Working with Provencher_Roy was wonderful. They were constantly bringing new ideas to the table.”

The facility was only open for three months before the pandemic hit – but for each of those months, it was fully booked. Moving forward, the centre will be offering a mix of in-person and virtual programming.

“People want to be in spaces that encourage them, that give them the inspiration to do their best work,” Westlund says. “The Algonquin Learning Centre is definitely that kind of space.”