Best Offices Ottawa: Beyond the walls

Tucked just off Baseline Road, Mercury Filmworks’ new headquarters displays both a restrained professionalism as well as the wild creativity that’s driven the animation powerhouse for more than two decades.

Now housed on three floors in the Qualicum Centre, Mercury’s office features black and white walls and carpeting that’s punctuated by bursts of colour and creativity.

The company’s award-winning animations are slowly taking over the office, with drawings, cardboard cutouts as well as film and TV posters scattered throughout. 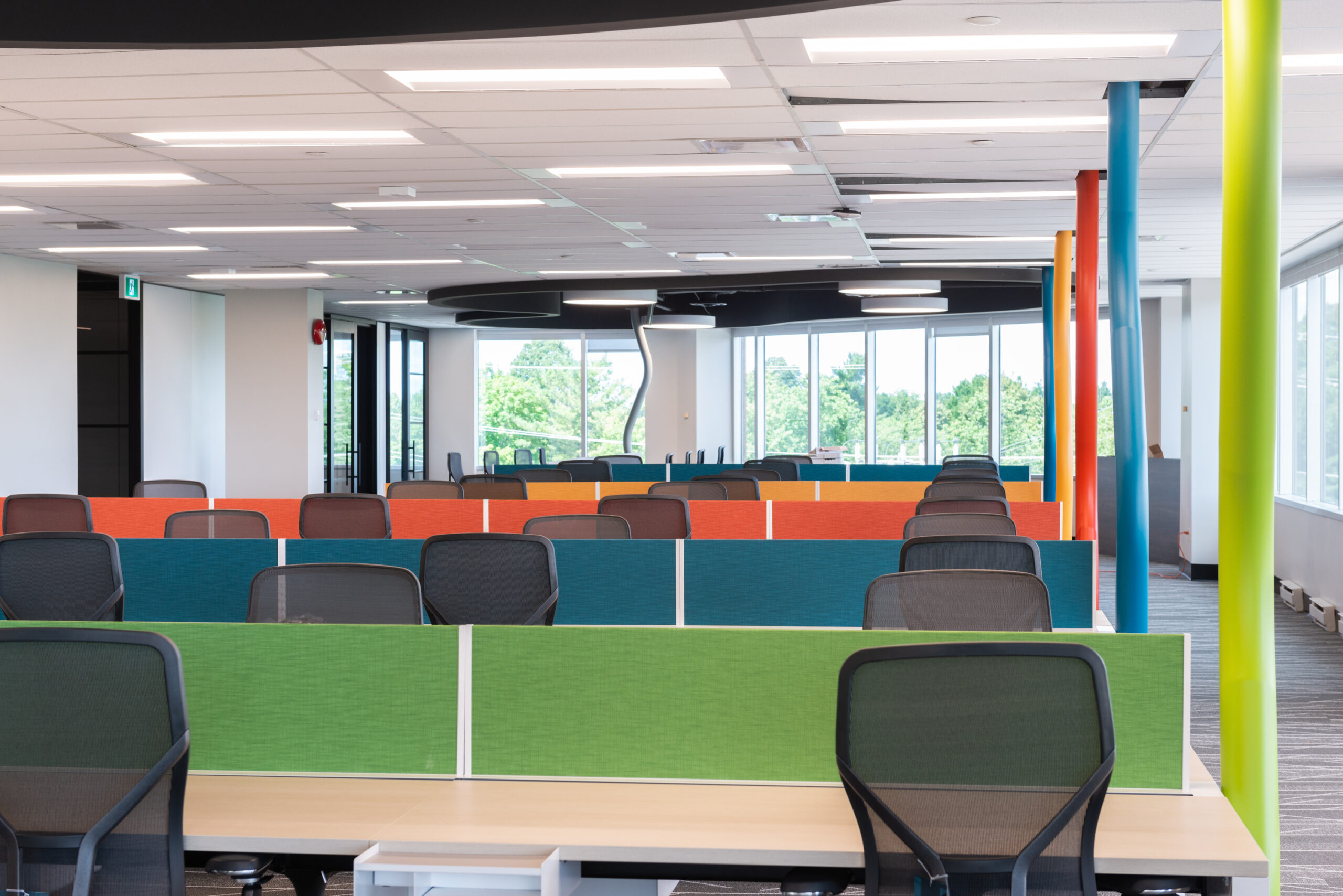 That ability for Mercury’s office environment to constantly change with the company is exactly what founder and CEO Clint Eland wanted when he first started thinking about the design two years ago. But at the time, he didn’t know how to express it.

In furniture distributor NUA Office Inc., he found a partner that could bring his dreams of a sleek, modern but changeable, customizable office to life after finding himself taken by one of its most cutting-edge products, Allsteel’s Beyond moveable wall system.

The Beyond system is the chameleon of the office furniture game, a shapeshifter that can completely change its appearance at a moment’s notice. Its functionality reflected the very nature of Mercury – constantly changing and adapting.

The customizable design means the walls can be easily adjusted to meet Mercury’s growth as well as the desires of the company’s nearly 300 employees. 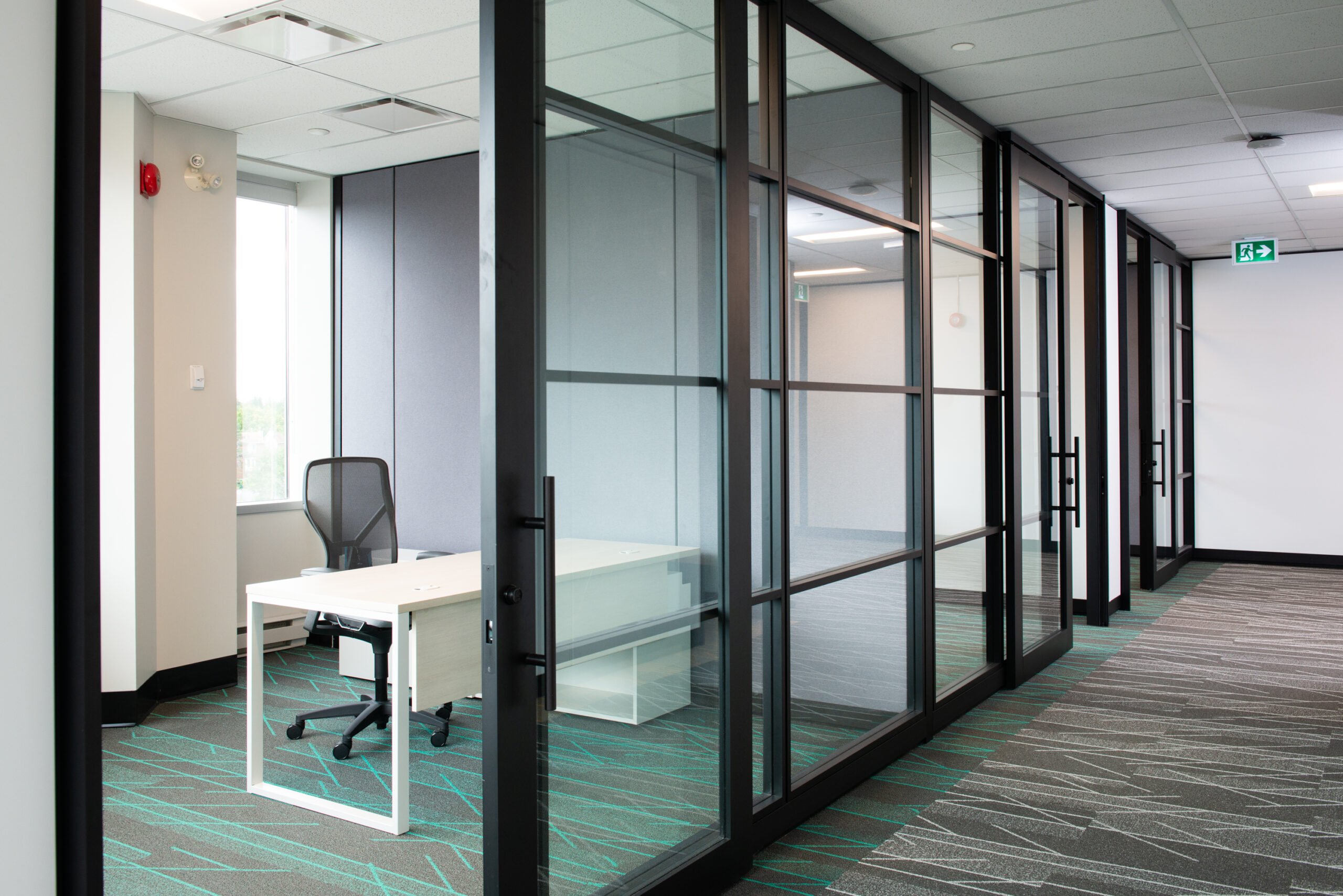 Eland said the ability to change the office layout as the company evolves was a key consideration in opting for the Beyond system, a decision that was only made after conversations with NUA about exactly what he wanted in a new office, and a visit to Allsteel’s showroom in Chicago to see it in action.

Just like the entirety of Mercury’s headquarters, the Beyond wall system is sleek and understated with a creative twist. The huge glass sliding doors flood the offices with natural light, while black frames fashioned to look like movie strips give a casual nod to Mercury’s work. Paired with the muted colours of the walls themselves, they give the Mercury office the “blank canvas” look Eland desired. 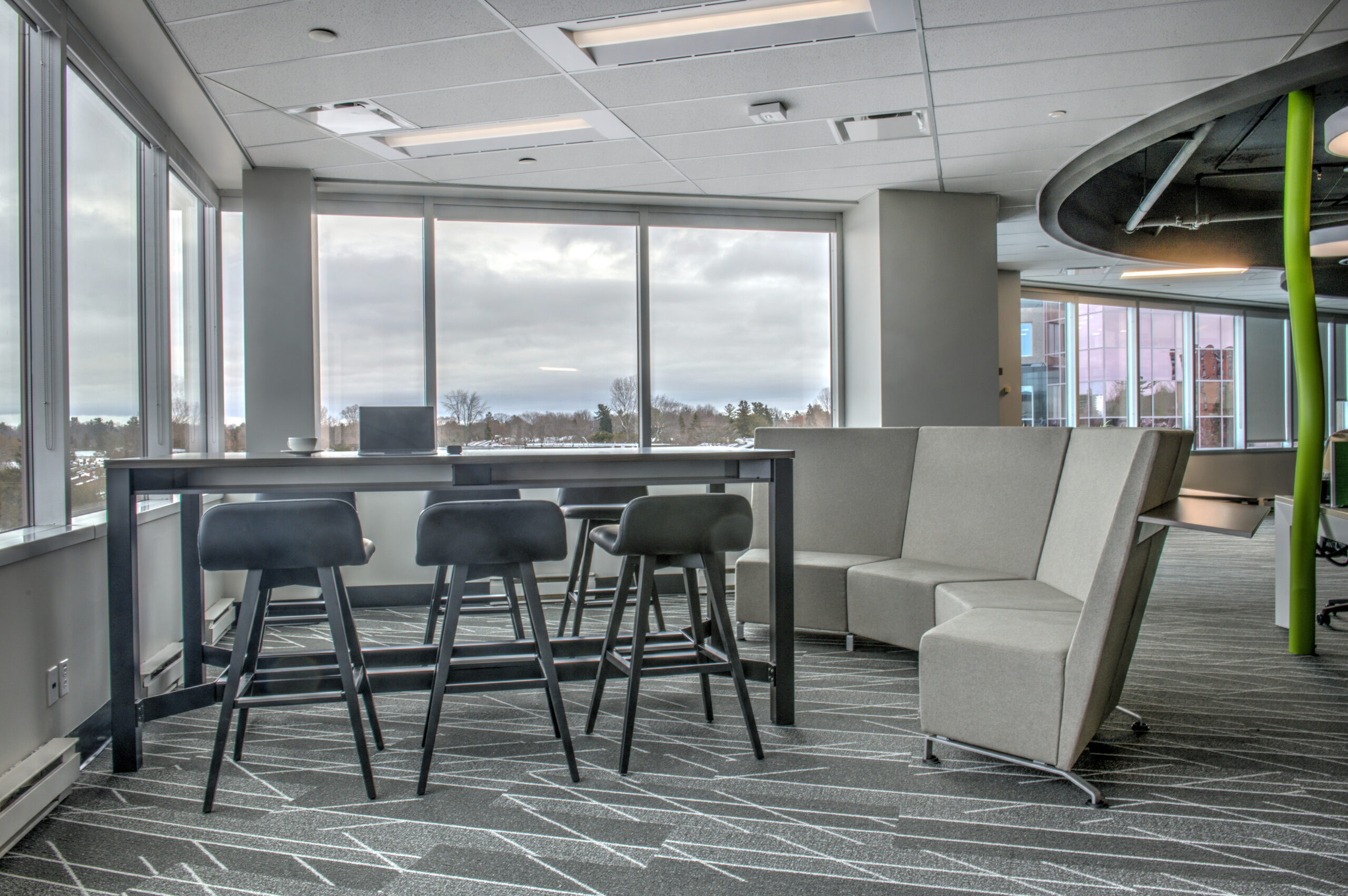 “One of the other things that drew us to the system is that unlike a traditional dry wall they have a metallic skin to them so we’re able to use these walls as sort of a living gallery board.”

Created by NUA founder Eberhard Von Huene and licensed to Allsteel, Beyond is an adaptable, unitized wall system that gives offices an open, connected feel while still allowing for space to conduct confidential conversations and meetings.

The combination of a high-profile client such as Mercury and a large installation easily makes this project one of NUA’s most prominent projects, and principal Robert Hill hopes its long-term cost effectiveness and environmental benefits means plenty of other companies will follow suit. 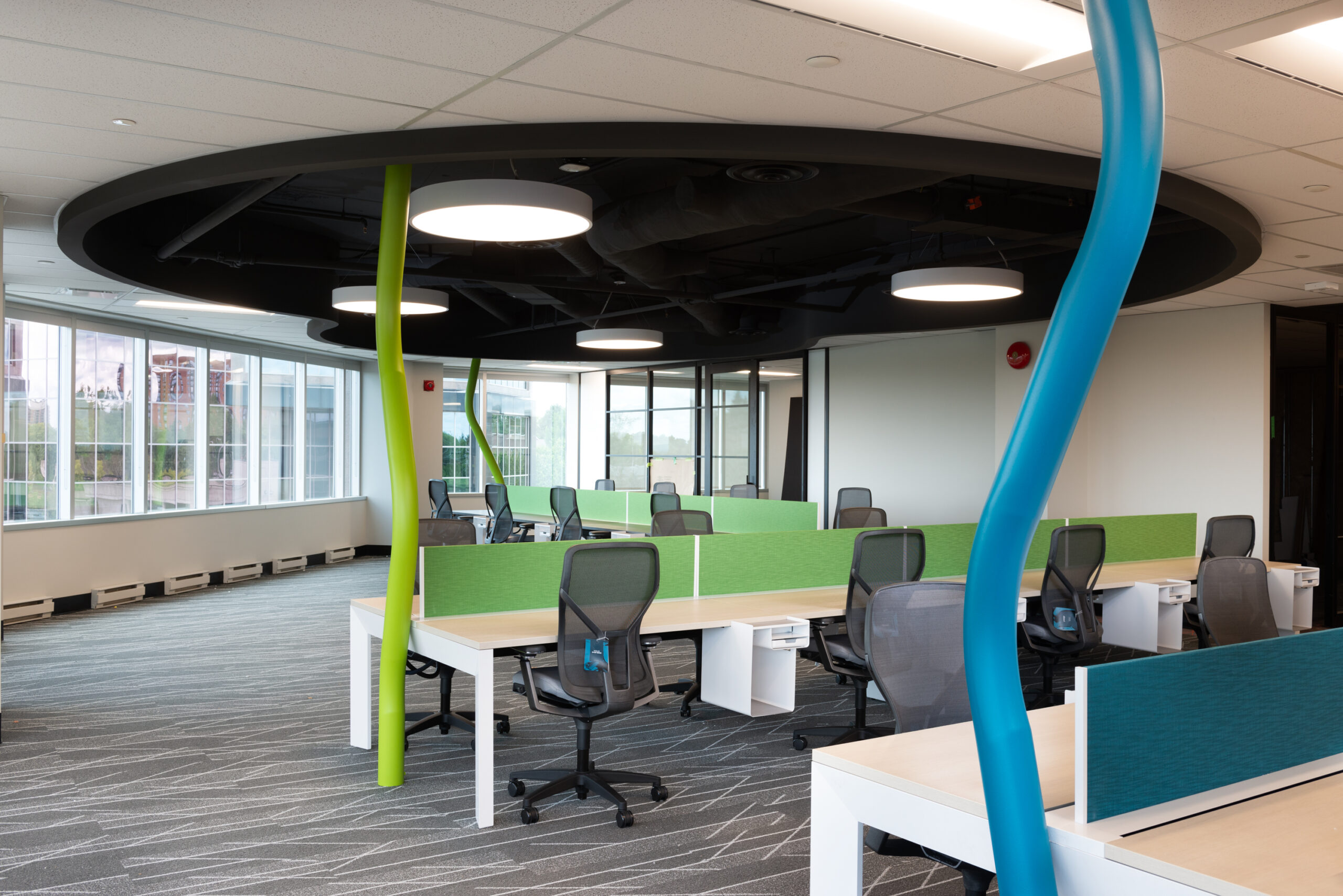 “Saving both money and the environment is more than a trend – it’s a movement,” Hill said.

In addition to the NUA-supplied walls, Mercury also purchased approximately 250 Allsteel workstations as well as office chairs and other pieces including meeting tables and lounges.

The Stride workstations clustered around the office are stylish and elegant, with clean lines and colourful dividers. Each work area provides seating for six to eight employees and is supported by large white beams, meaning there’s no need for supports underneath.

Eland began the office design process with a rough concept in mind but hadn’t settled on a particular layout or furnishings. He said he quickly identified NUA as “a company that would be able to help us with our transition.” 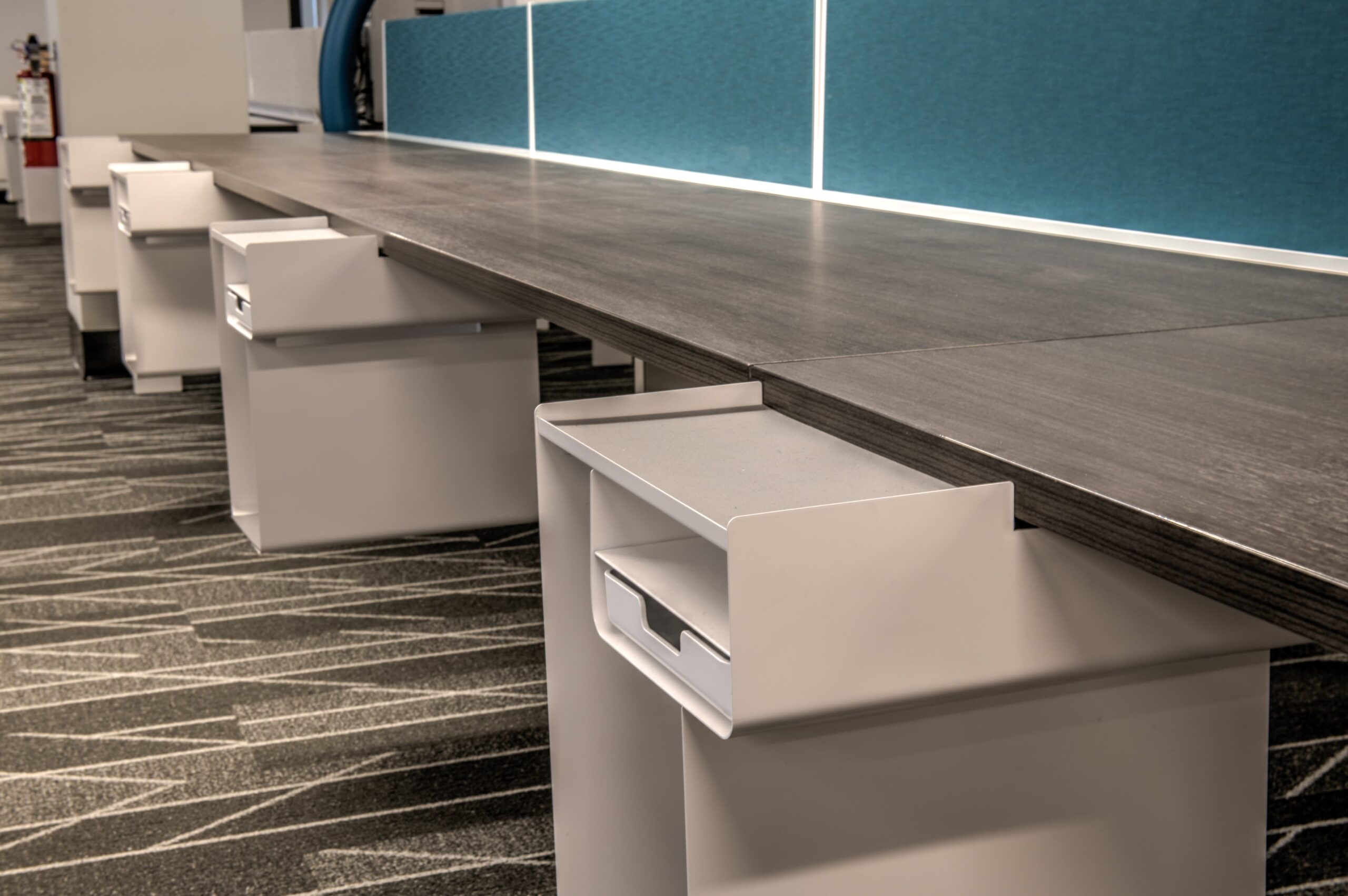 “We knew we had to move but we didn’t know exactly what we wanted so in that interaction there was a lot of prodding and questions that I think we both benefited from.”

Hill said working with his clients to define their identity, culture and what they wanted to become was a key part of NUA’s process to fit out a work environment, and the Mercury project showed the results that could be achieved.

“Everyone has furniture, but we’re a consulting partner. The value that we provide happens long before anyone wants pricing on furniture.”

The fit-up of Mercury Filmworks’ Ottawa office involved the collaboration of several contractors and professional service firms that made the project a success:

“The Mercury office had two distinct design needs: Creating a fully functional office and studio space for their growing team while fostering a highly creative, energetic and collaborative work environment. Integrating design elements that strayed from the ‘norm’ was key to the success of the project.”
– Robin Peixoto, principal, Parallel45 Design Group

“Mercury Filmworks’ space is not only functional, but also showcases the creativity of this homegrown success story.”
– Ryan Barresi, vice-president, Cushman & Wakefield

“If you are thinking of using truly movable walls on your next project, Beyond is a great system to consider. We’ve really enjoyed working closely with the NUA team. We appreciated the knowledge, expertise and dedication throughout the project. It was a great experience.”
– Ray Licari, vice-president, Bassi Construction LP