A decade of fundraising for children in need

Once again, the tournament presented by Diamond Level Sponsor, GAL Power, was a sold-out event supported by over 63 corporate sponsors and the newly established, GAL Family Foundation – contributing at a Diamond Sponsorship Level.

This year’s HKGU golf tournament and pre-tournament fundraising activities have generated nearly $84,766 in net proceeds raised to date, with another event still to come in the late summer. GAL Power has been instrumental in achieving a 10-year commitment to raise over $680,000 for children in need.

“I am so pleased with the great support we have received for our 10th edition of the HKGU Charity Golf Tournament. GAL Power and dozens of returning sponsors ensured that we had a wonderful tournament day filled with great hospitality and prizes.”

“It’s been a wonderful 10th anniversary event for children’s support in Ottawa.

Thank you to all of our sponsors and participants. Special thanks to our organizers and volunteers.”

In addition to the on-course skill events, each year a top team that achieves the lowest score for the day, using a scramble format, is crowned. This year’s tournament saw the setting of a new tournament record for the top team award achieved by the Sens Alumni foursome with a score of 53. That’s 19 under par! Close on their heels for the coveted award were team GAL Power 5A (score: 57) and team Gervais Towing 4A (score: 61).

During the tournament gala reception, long-term major tournament sponsors were recognized for their years of commitment to the HKGU tournament.

This tournament is made possible by the tremendous support of GAL Power. They have made a 10-year commitment to raise more than $680,000 through this event. GAL Power, one of Canada’s leading providers of power and temperature control rental solutions has earned leadership status by consistently supplying high-performance generators over the past 30 years. Visit www.galpower.com. 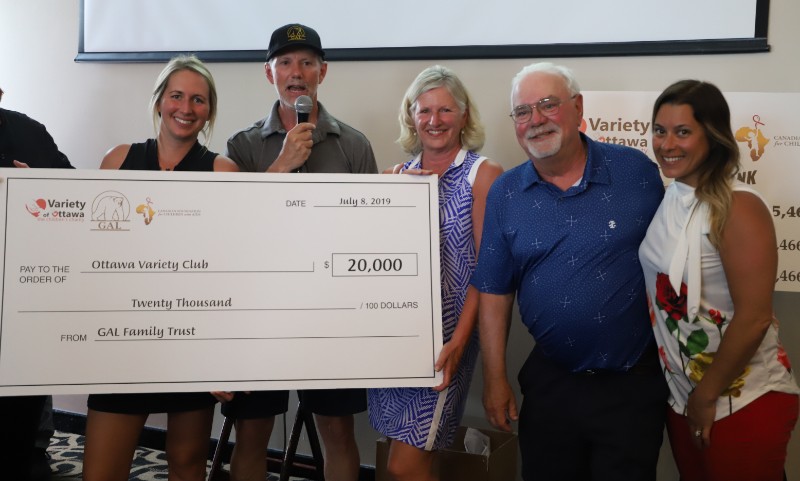 How proceeds will be used

With the proceeds from the tournaments, Variety of Ottawa has directed proceeds to support the Leukemia Society of Ottawa and most recently to establish a commitment with CHEO to fund $100,000, over a four-year period, towards the cost for a new heart and lung bypass machine.

“As a result of the tremendous support from all of the 2019 event sponsors, over $90,000 in total cash and ‘convertible’ prize donations will be passed on to the two children’s charities. This brings our 10-year total raised to over $685,000 in net donations (after yearly player registration fee costs are subtracted); which provides funding for critical childrens’ programs.”

Variety of Ottawa has also expanded its partnership with the Children’s Wish Foundation and Darcy’s Angels, established a fund through the JMM Golf Tournament – in honor of Jim Morrison (Ottawa restaurant supporter), and provided funding for a local child battling cancer. CFCA continues to use its share of the net proceeds to significantly expand sustainable food programs (livestock and greenhouse) within the sub-Saharan region of Africa, which has been decimated by the impact of the AIDS virus. Combined with the organization’s American counterpart AFCA, these programs are now supporting over 30,000 families across four countries.

Although this is the final year for the HKGU Charity Golf Tournament, the tradition of giving back will continue through the HKGU fundraising events including the first annual JMM Golf Tournament being held Aug. 26, 2019 at GreyHawk Golf Club. We hope you will join us so we can continue to expand our programs for children in need in Ottawa and in Africa!

Visit the tournament website for more info about this year’s event at http://hkgu.varietyofottawa.com. Contact Bill Garbarino, tournament director at garbarw@algonquincollege.com for available sponsorship and donation opportunities.

Thanks to major sponsors

Thank you to bronze level and prize sponsors, and dedicated volunteers. See the complete list of sponsors on the HKGU tournament website sponsor section: http://hkgu.varietyofottawa.com