Sonia Powell and Lynn Ferron maintain professional demeanors but their shared excitement frequently bubbles through as they lead a tour of the nearly brand new federal government co-working space at the Place d’Orléans Centre.

It’s not that they’re showing off a newly renovated home to friends, but the tour feels somewhat like that, and for good reason.

Powell, the director-general of workplace solutions at Public Services and Procurement Canada, has led the recent installation of five such co-working spaces for federal employees in the National Capital Region. This one is on her home turf, however. She lives in Orléans and is herself a satisfied user of the new drop-in style co-working space. 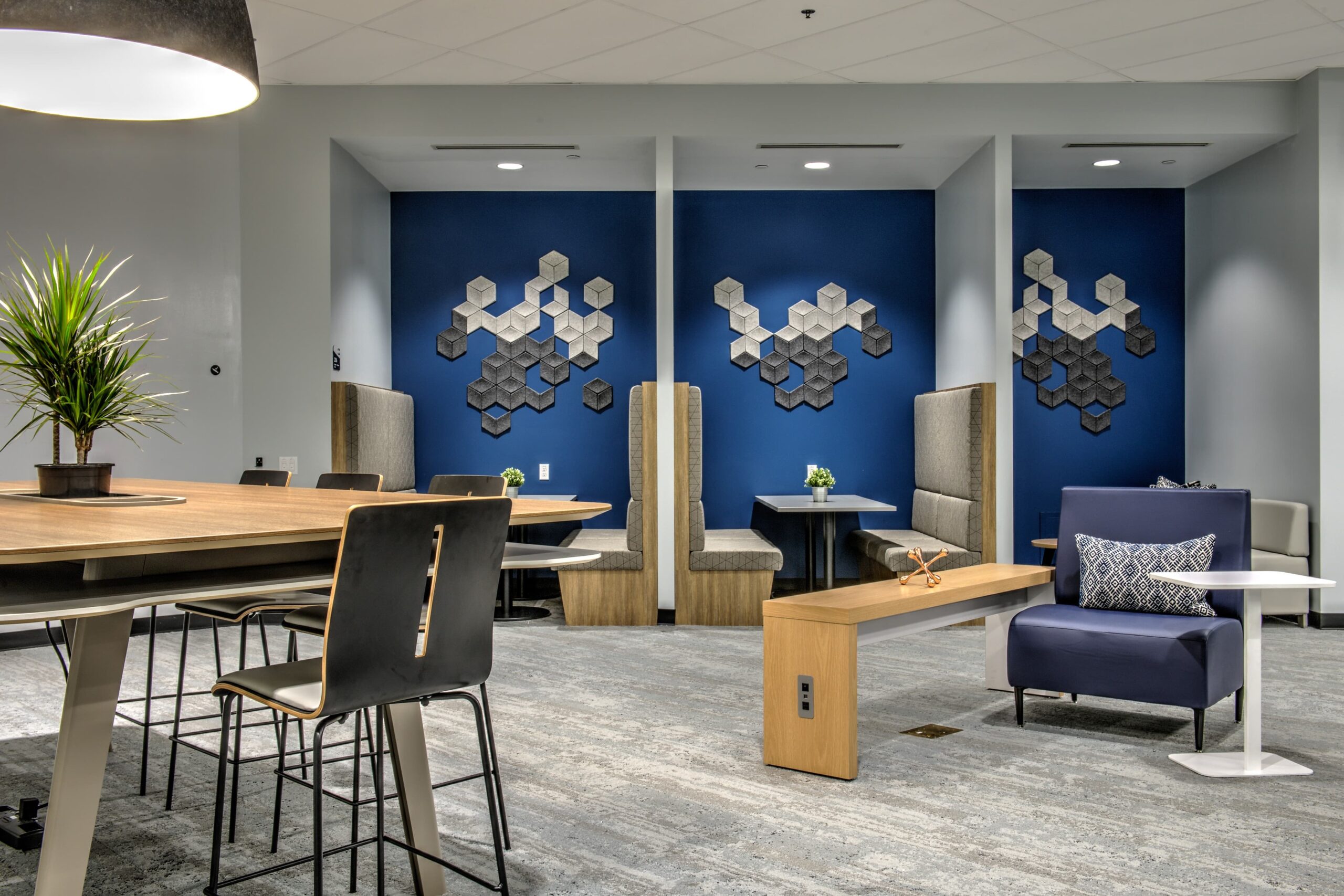 These convenient and ultra-comfortable facilities offer closer-to-home alternatives that can help nearby federal employees avoid rush hour, be productive during snowstorms, or simply refresh themselves in an experience that’s a kind of midpoint between working in the office and working from home.

“We knew that there were no federal government offices in Orléans,” said Powell. “So when we were selecting the locations, this was one of the top candidates. It’s proven to have been a good choice.”

The space opened in September and early usage stats confirm that good choice.

Ferron was no doubt happy to be part of that celebration. She is a principal and practice leader at the Ottawa office of HOK, the international architectural design firm that brought the space to life. 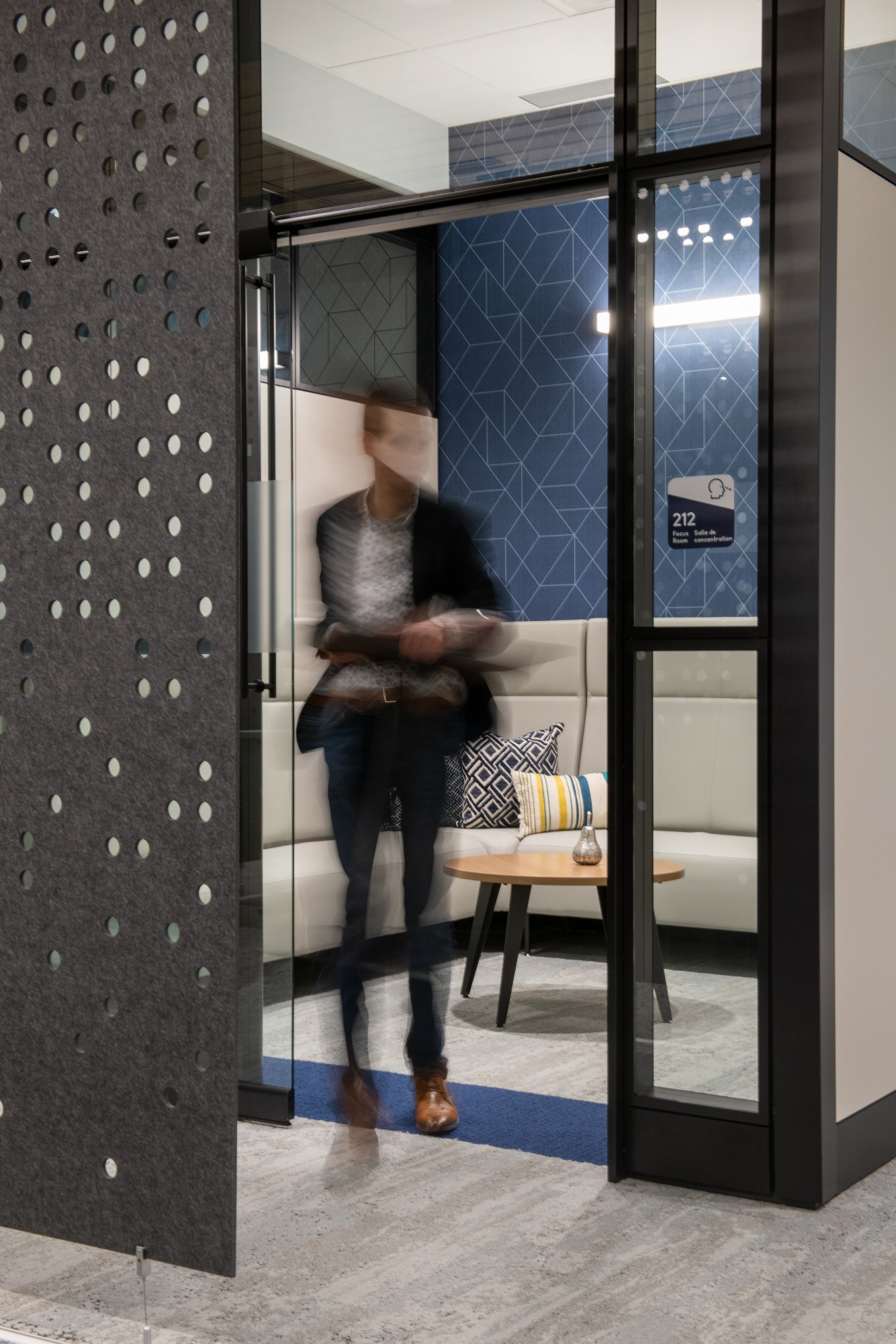 HOK is a global entity with 24 offices across three continents. The firm was selected for the job chiefly because of an extensive track record in these types of design challenges in Ottawa and beyond. Local clients include the RCMP, Canada Revenue Agency, Algonquin College, Canadian Blood Services, Adobe, Accenture and Carleton University.

“HOK is one of the leaders in this innovative design,” said Powell. “It was really important for us to work with somebody who had done it before and had done it successfully.”

Ferron was deeply involved in the process alongside HOK’s lead designer on the project, Christian Cruz and design support, Soha Ebadi.

Leading the list of requirements was the need to create a space in which a variety of people could feel comfortable and in a range of situations, alone or in groups. HOK has had plenty of success on that front.

“We design human-centric spaces that enable people to feel at ease and empower them with choice, options and movement,” explained Ferron. 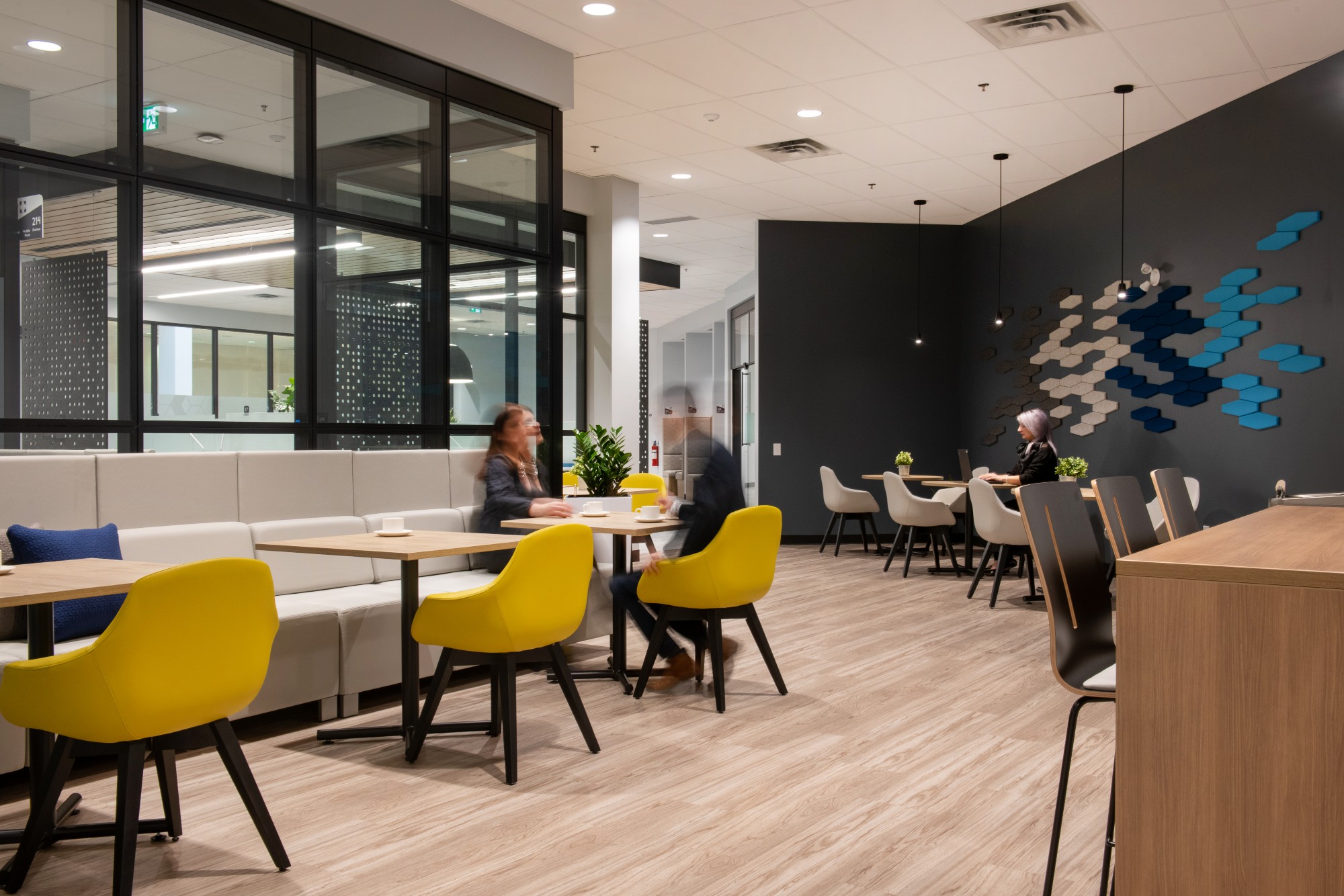 When showing off one of the three-seat presentation areas in the Place d’Orléans space, Ferron noted how it has been shaped to spur co-creation and break from conventional norms.

“It’s no longer somebody with a microphone and a PowerPoint dictating to the people in a meeting,” said Ferron. “There’s still a screen on the wall, but participants are all encouraged to partake, share their ideas via writing on the walls, posting thoughts or sharing ideas electronically. Everybody’s getting involved and ideas are being shared, so the space supports a much different way of working.”

“People feel comfortable and calm in a space that emanates nature.”

Enabling new and different ways of working is the core idea driving all the new federal government co-working spaces in the region and elsewhere in Canada.

“We’re really trying to reimagine how we work,” said Powell. “For us, the long-term vision would be for public servants to be able to work anywhere, anytime, collaborate with anyone, on any device.”

On a small scale, the co-working space at Place d’Orléans – which will be connected to the city’s light-rail line in the coming years – almost makes that vision possible today.

The wide range of environments include a “touchdown” area featuring spacious desks where users can sit or stand with laptops (all desks in the space, in fact, can be raised to a standing height), meeting rooms with upright seating for groups of four, a conventional board room, and futuristic “Focus Pod” seating that’s cocoon-like and includes ottomans that can be pulled out for greater relaxation.

In addition to individual comfort, ample opportunity for collaboration is a key objective across the co-working space initiative, noted Powell. 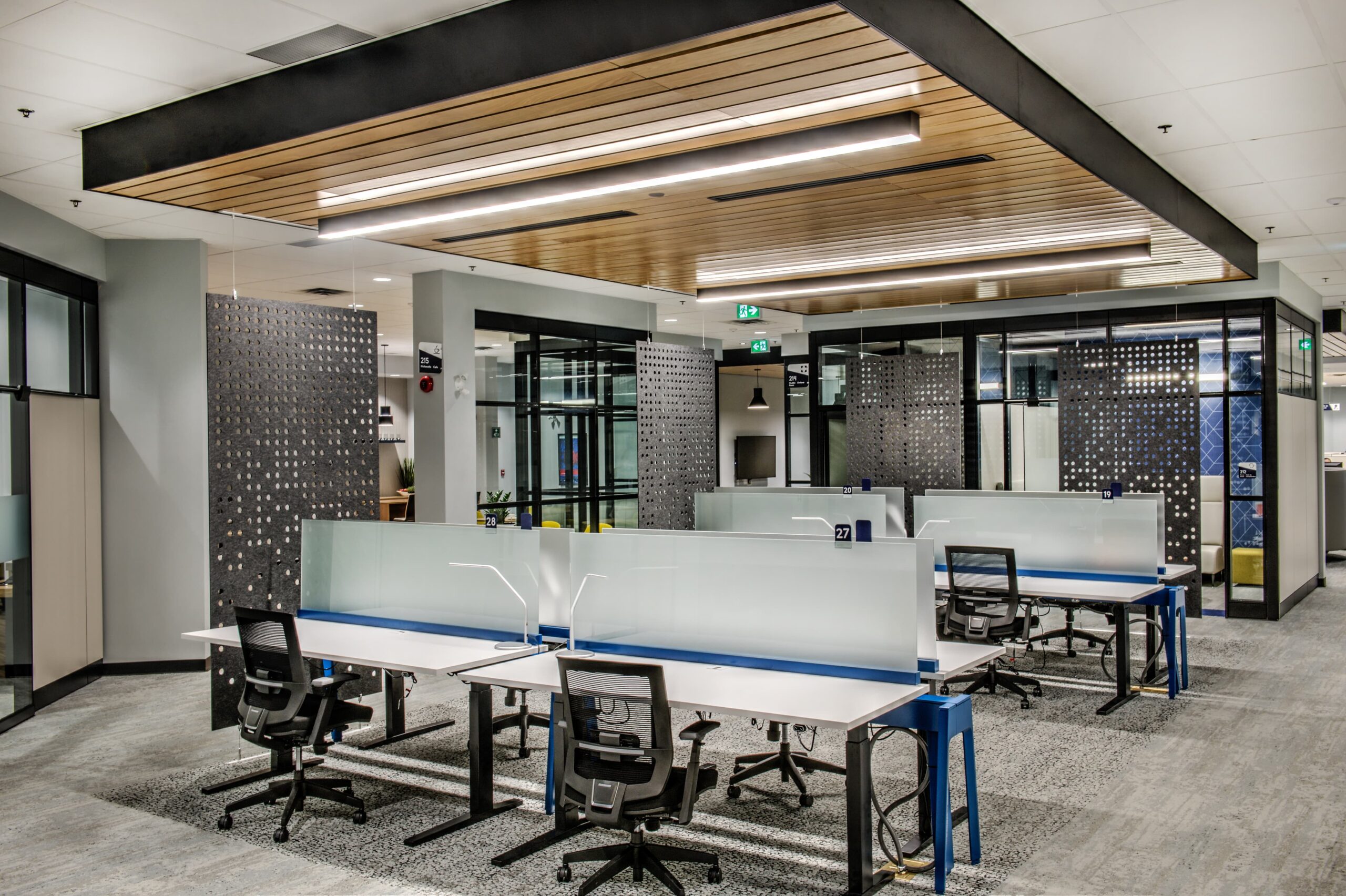 “They’re interdepartmental shared spaces, if you will,” she added. “For us, this is the vision of working in the future, where more and more departments have the ability to come together.”

To set the stage for that free-flowing vision, Ferron and colleagues drew on their experiences of putting human needs first.

“We believe in the power of design. We ensure environments are designed to be inclusive to all and address neurodiversity and wellbeing,” said Ferron. “People feel comfortable and calm in a space that has a colour palette and materials that emanate nature.”

There’s also a large, open communal kitchen that itself inspires a homey feeling and the possibility for new conversations.

“We’re providing a much better environment,” said Powell. “You’ll see people working away and meeting, but you don’t hear it. It’s a very calming work environment and that’s one of the advantages of designing space in this way.”

The government’s additional four co-working spaces in the region are located downtown at L’Esplanade Laurier, on River Road near the airport, on Legget Drive in Kanata and on De La Cité Boulevard in Gatineau.