With its A-shaped frame, white brick walls and rows of large windows, MNP’s new office is far from conventional. The heritage building the business and technology firm now calls home was built in 1925 and was originally used for wire cloth manufacturing. But while the exterior may provide a glimpse into the past, the inside of the team’s new workspace was constructed with the future in mind.

“We were looking for something different,” says Sean Murphy, regional managing partner at MNP. “When I saw this space I thought ‘Wow! We can do a lot of really cool things with this space.”

While MNP’s Carling office remained business as usual, the company had outgrown its Kanata location. Murphy says he set out searching for a place that could accommodate the company’s size and vision. MNP is expanding beyond its accounting roots to offer more digital and consulting services to clients, which means the staff is made up of a diverse group of corporate businessmen and women and developers. It can be difficult to design a space with both of their needs in mind, says Murphy, but the office at 7 Hinton Ave. near the Parkdale Market does just that. 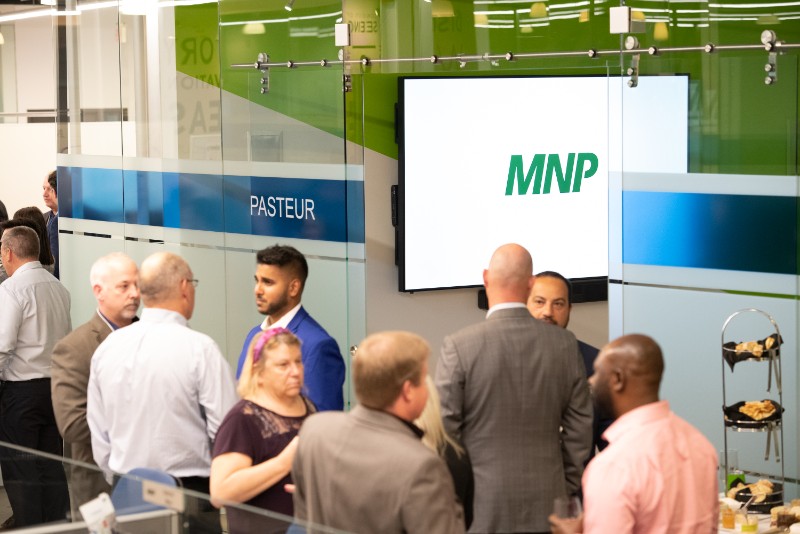 There are two distinct sides of the firm’s office that Murphy distinguishes as “traditional” and “creative.”

Visitors to MNP’s office enter an open-concept reception area that flows towards glass enclosed meeting rooms, all of which are named after famous scientists, discoverers and inventors such as Tesla and Hawking.

Beyond those rooms lies the traditional side of the office: a bright white open space, divided into individual workstations and private offices. Despite functioning as a customary office, Murphy says it was important to maintain aspects of the building’s industrial feel. Both the traditional and creative sides of the workplace feature grey concrete floors, tall ceilings and suspended lighting that add to the unique design. 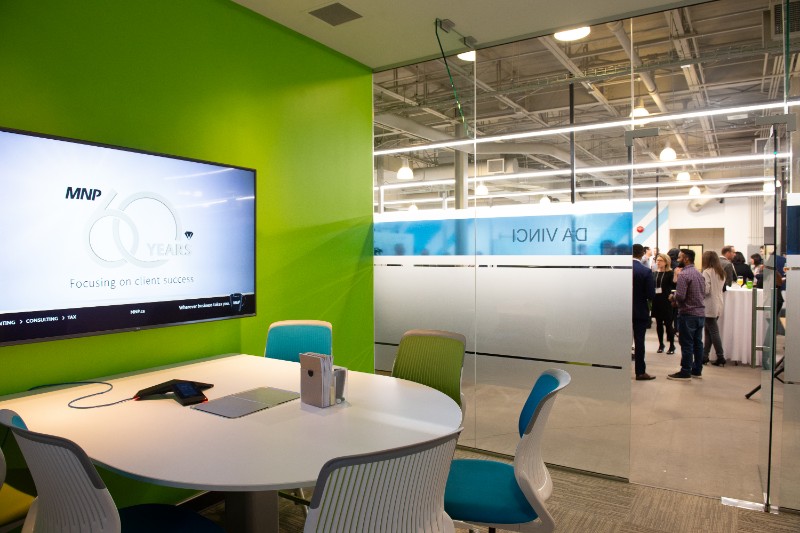 When redesigning the space, Murphy says he wanted every room to have multiple functions, optimizing the office’s vast square footage. The large open concept kitchen area acts as a divider between the traditional and the creative spaces, and features its own distinct work areas.

“We’ve built a large kitchen that we can actually do stuff in,” says Murphy. “The kitchen is a social space for us. It gives us a chance to engage with the entire team at the sushi table island, or enjoy a game of pool.”

Inside the kitchen is a bright blue wall, dotted with the painted handprints of MNP employees. It’s called a “ritual wall” and was a staple in the previous A Hundred Answers office space. New employees would add their handprints upon joining the team, making their mark on the company, explains Murphy. Since they couldn’t physically bring the old wall with them, they transplanted it as an image into the new space.

To help welcome employees and guests to the new office, Murphy and the MNP team set out to create a new ritual wall, reflective of the company’s growth and creativity. Situated in the lobby is a bright green DNA strand made of lights stretching the length of the wall. Eventually, every employee will add their name and location to the strand, which will then be paired with a short video segment highlighting the staff and giving them a voice and contribution to the company. 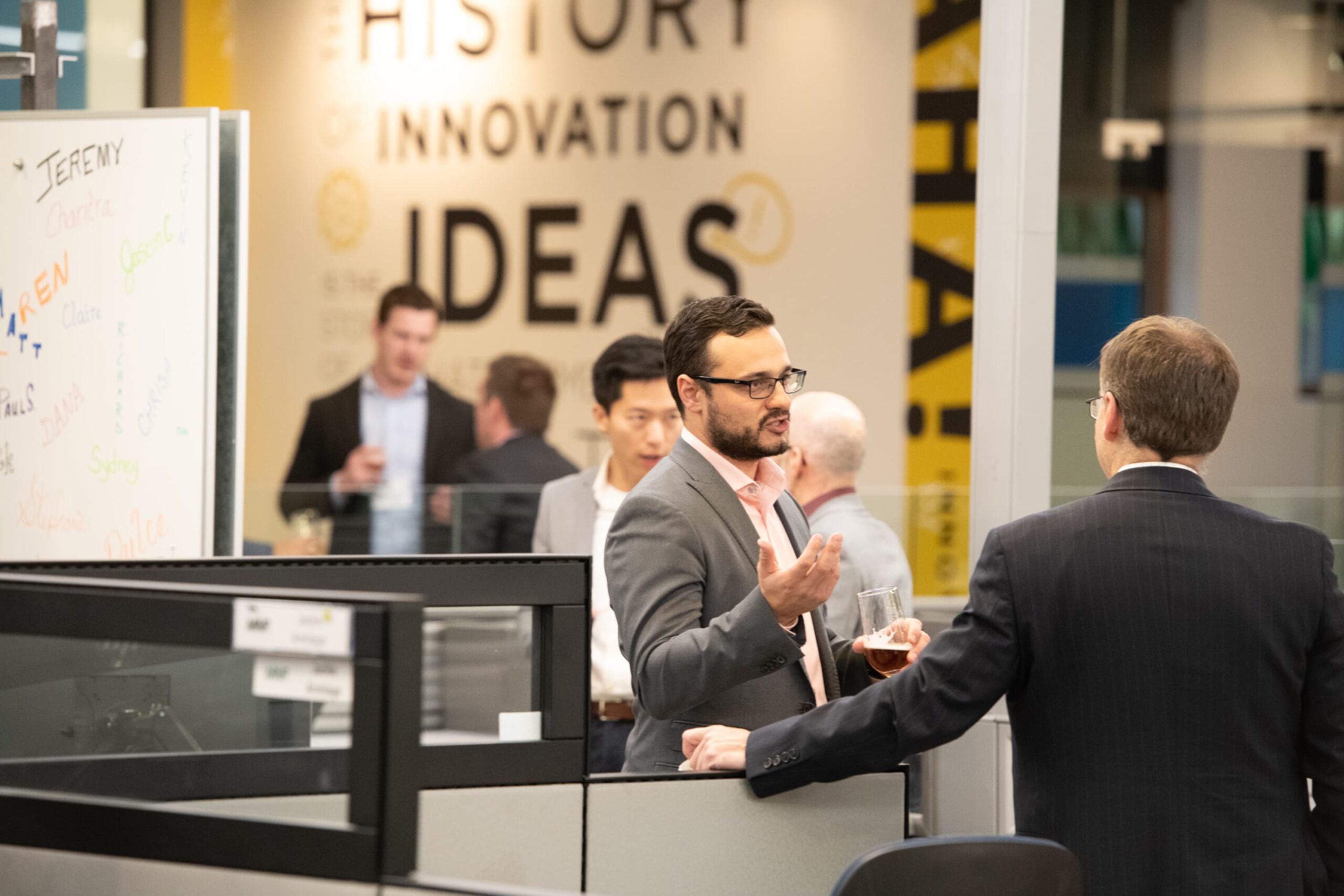 “I want people to feel like this place is theirs,” he says. “That’s the strength of the culture that we are trying to bring to the table.”

Beyond the kitchen is where Murphy’s vision came to life. The previous office tenant, Fuel Industries, left the vast warehouse-like space as a blank canvas for MNP to fill. There were already brightly coloured, glass-enclosed meeting rooms lining the perimeter office, which minimized the amount of fitups required.

The “digital hub” portion of the office is a completely open-concept which allows for a lot of collaboration and brainstorming. MNP added in several “huddle spaces” – appropriately named Eureka, Gadzooks and AHA – that are filled with couches, graphic-covered walls and whiteboards for more informal meetings and projects.

“With the open space and work rooms, you see everyone, everyday,” says Chris Harris, manager of consulting and technical solutions at MNP. “There are always people huddling or going off and having a quick conversation. Before, we would always have go into someone’s office.”

A lot of thought went into the functionality of the space, which is evident in the company’s ability to accommodate different work schedules, says Harris, who works non-traditional hours to optimize his commute.

A large portion of MNP employees still live in the Kanata area, so moving the office to central Ottawa – while closer to many of their clients – was not everyone’s first choice. Murphy says they tried to take into consideration how they could make that transition easier on their employees. 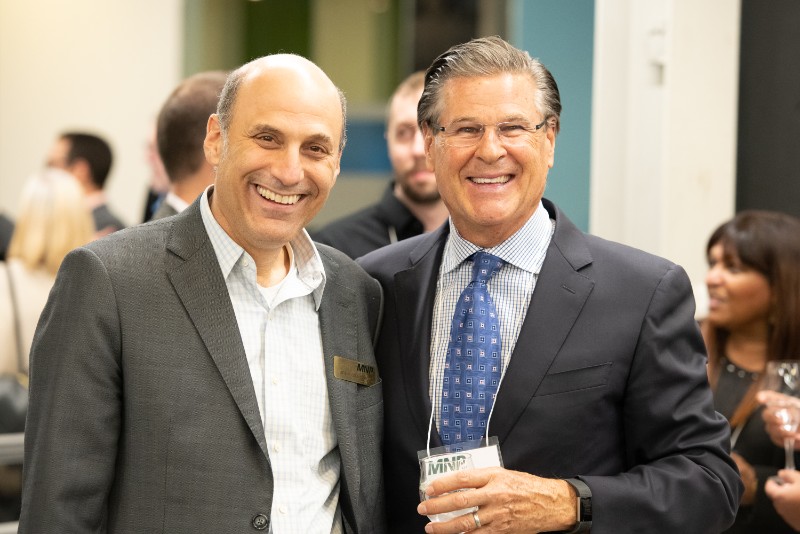 To celebrate the company’s move to its new office, MNP hosted an open house in October that brought together MNP employees and members of the business community to check out the new space. The cocktail hour was catered by Thyme & Again, another local company in the area.

“We are now integrated and developing relationships with local businesses,” says Harris. “We even did a scavenger hunt with the neighbourhood shops to have our people become more familiar with them. It’s important to build those connections.”

The company has also reached out to local charities in the area, such as the Parkdale Food Centre, to see how it can continue its charity involvement at the new office, he adds. 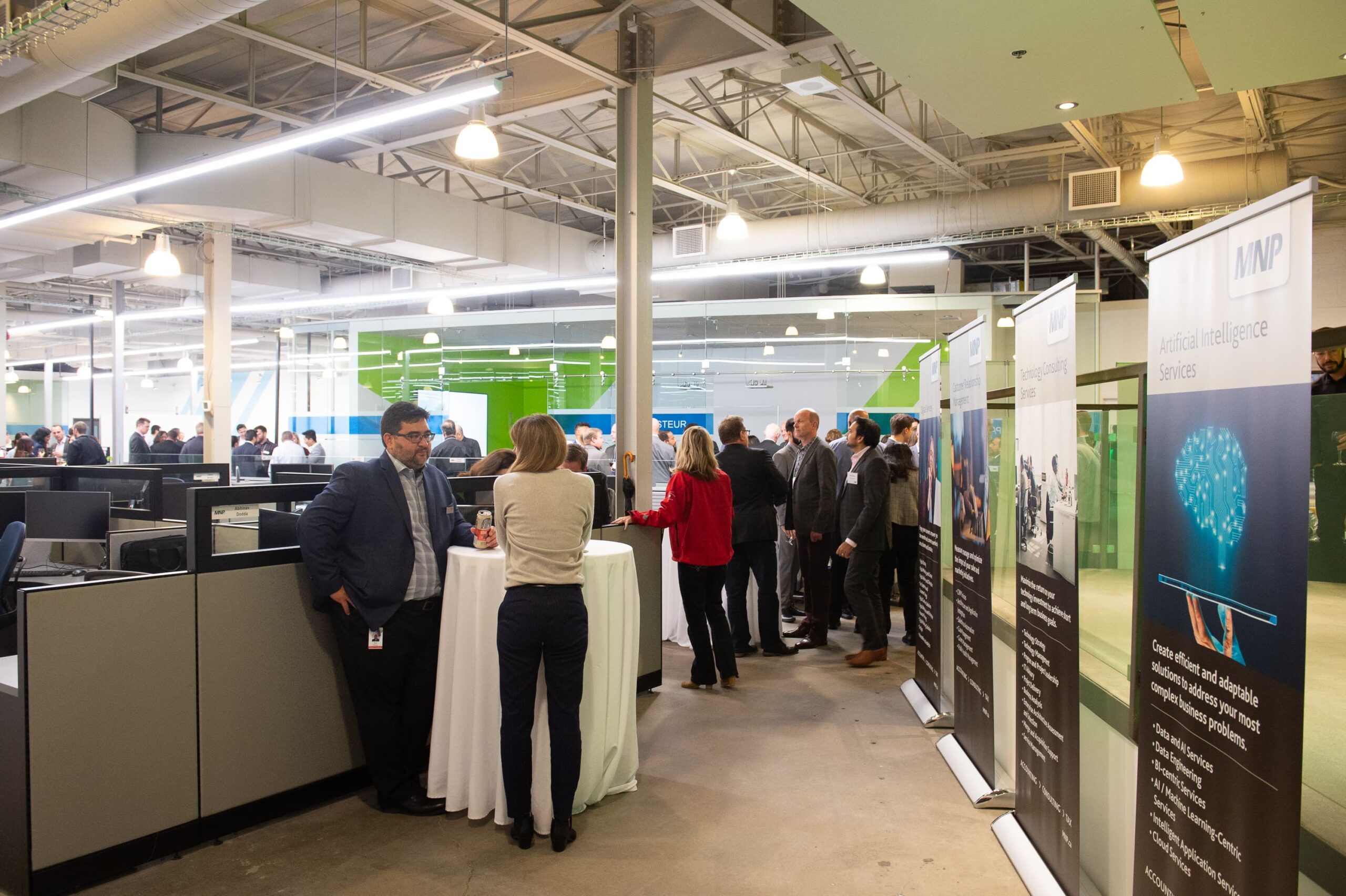 As the firm continues to settle into its new home, Murphy says he is looking forward to continuing to develop the space to reflect the nature of the company’s diverse workplace culture.

“There’s definitely an aspect of formality involved, but I didn’t want to lose the fun and quirky kind of stuff that you might see. If a Nerf gun war broke out, it wouldn’t be out of context,” he jokes. “We feel like we’re bringing in that mix of business and fun.”