Throwing a party at someone else’s office is unusual – unless you’re celebrating the merger of the two companies that designed it.

This was the case with COLE + Associates Architects, which merged with IDEA while the two firms were working on the design and refit of the Canada Green Building Council (CaGBC)’s national office. In January 2020, COLE + Associates adopted the name IDEA, an acronym for integrated design, engineering and architecture. 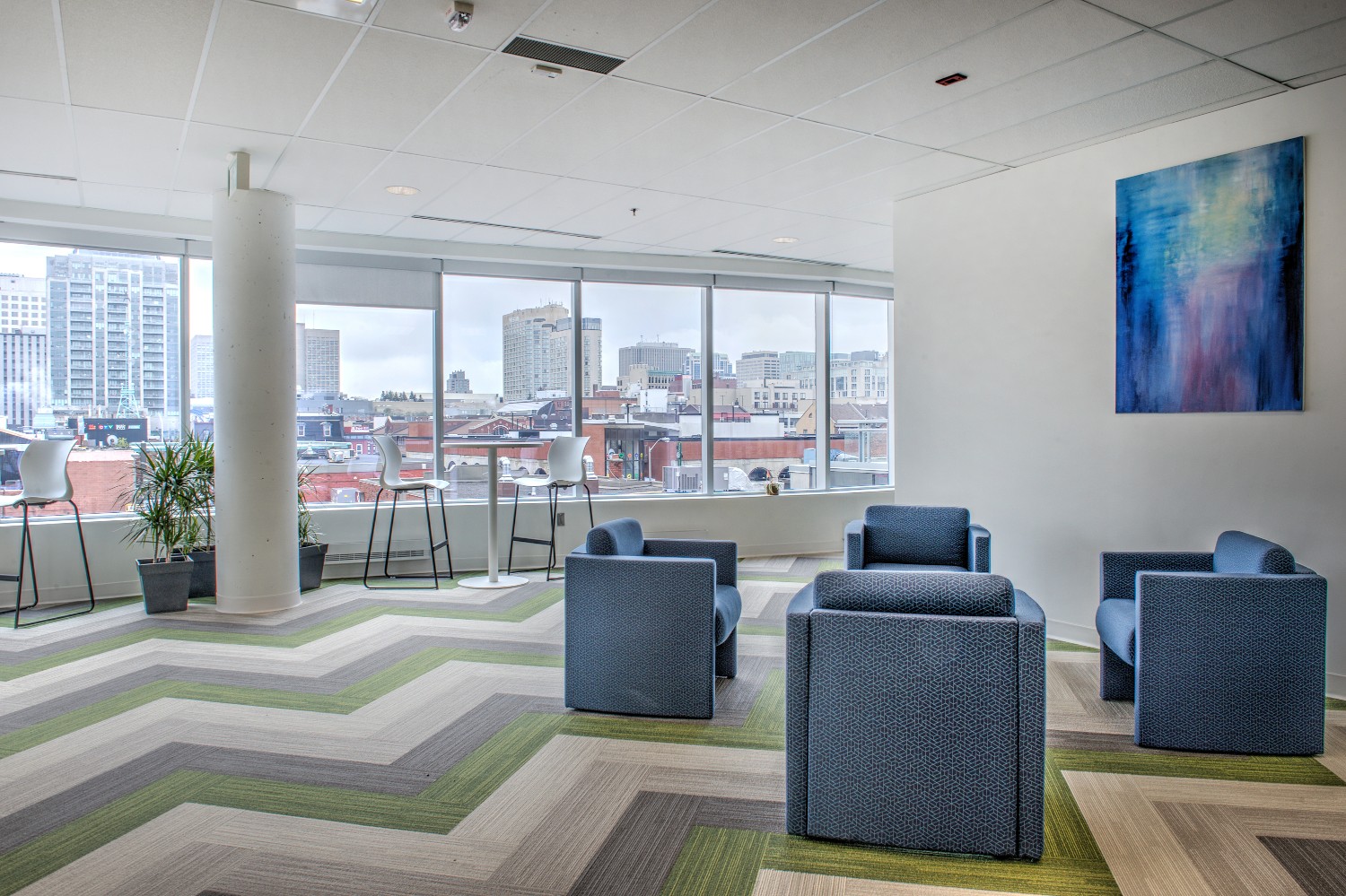 Both CaGBC and IDEA were proud of the finished space, which is aiming to achieve high certifications with a LEED Gold status as well as a WELL Platinum rating. When IDEA and COLE + Associates wanted to celebrate their merger in June, CaGBC’s office at 100 Murray St. was the obvious location. It not only showcased their sustainable design expertise, but its rooftop terrace was ideal for a party.

“From an architecture-engineering perspective, it’s a real honour to have been selected to do that design,” said David Cole, senior architect and partner emeritus at IDEA. “Everybody in Canada likes to work on important buildings for important clients and it was a feather in our cap.” 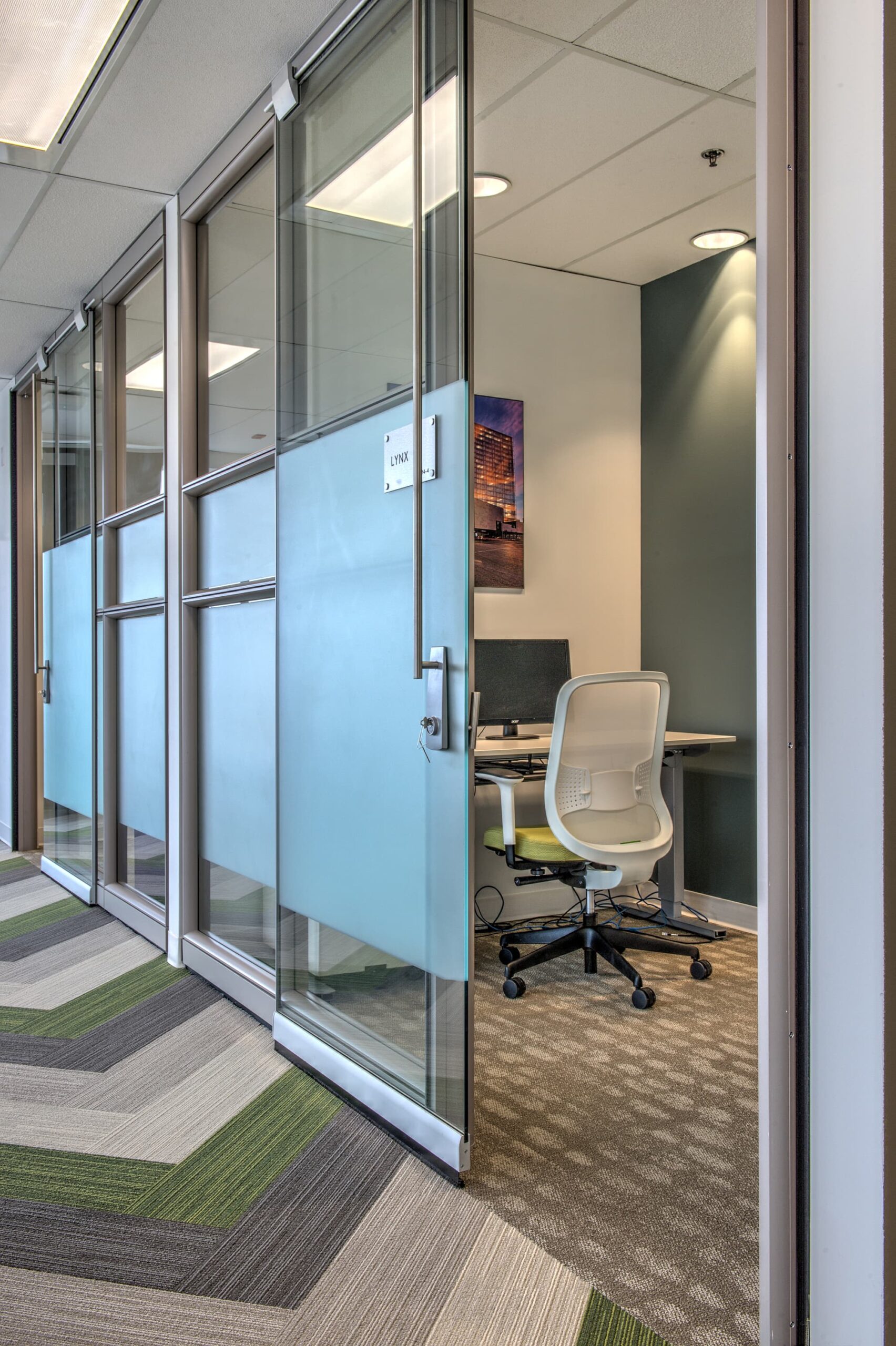 CaGBC previously occupied a small office in the ByWard Market, but when its large conference room had six desks in it, the non-profit knew it needed more space. CaGBC’s mission is to promote healthy green buildings throughout Canada, so its new office space had to be in a LEED-certified building that demonstrated environmentally responsible design, construction and operation.

The organization found it a block away in the first Zero Carbon building in Ottawa. CaGBC leased the space on the fourth floor.

“We really wanted something that would focus on the health and well-being of our employees,” said Peter Whitred, senior manager of green building programs at CaGBC. “We wanted a bright, accessible, open environment, with good indoor air quality, sound level and light quality.”

The organization also needed an architectural team experienced in LEED fitups that could make the space WELL certified, a designation for healthy office designs. IDEA had the required expertise. 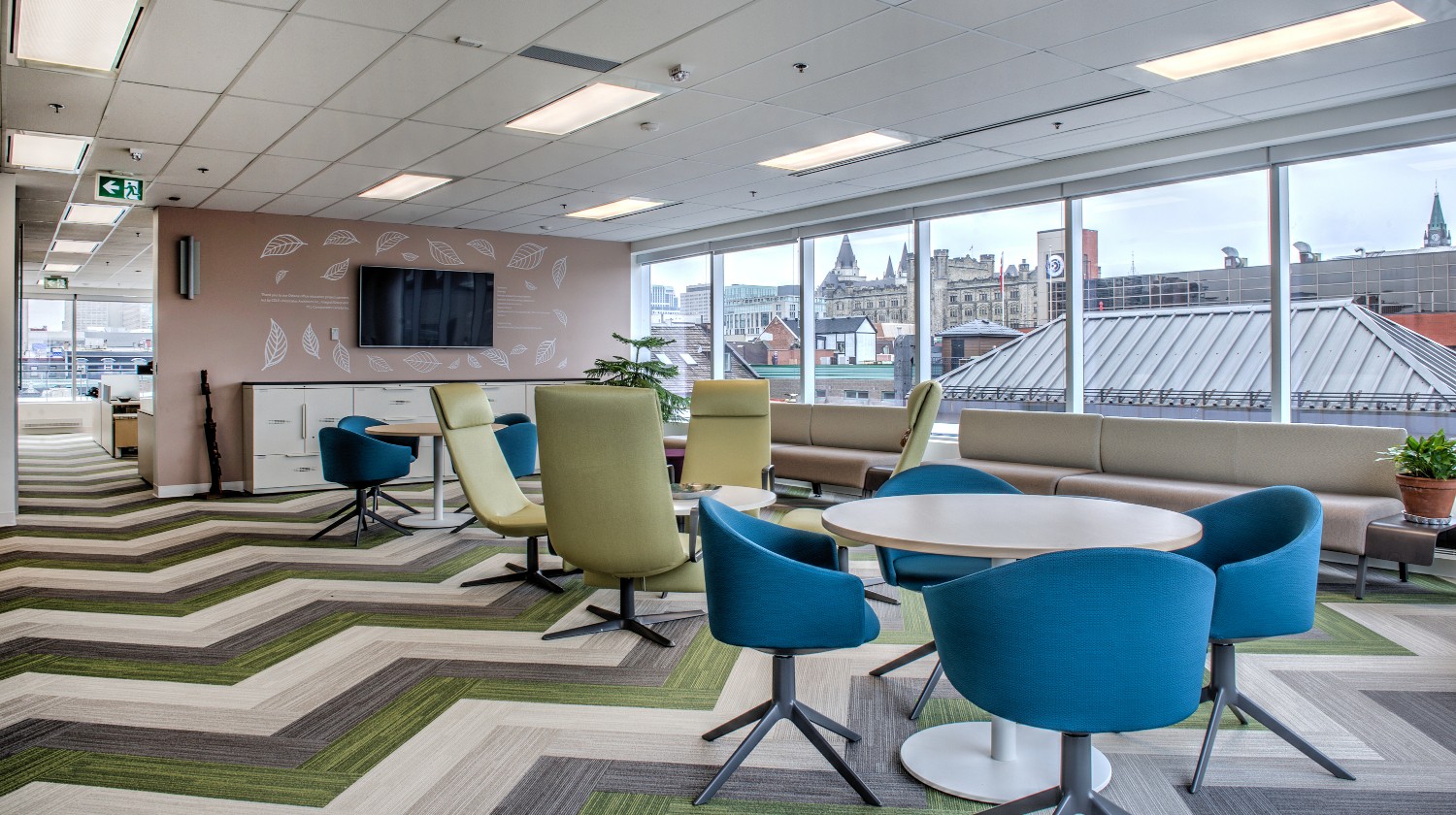 When they saw the new office space, the IDEA team was wowed by its potential. Huge northwest and south-facing windows overlooked the Market and had great views of the Peace Tower, Château Laurier and Gatineau Hills across the river.

“It is one of the nicest office spaces in Ottawa.”

However, the previous tenants had divided the space into offices and cubicles not configured to take optimum advantage of the windows.

“The space already had fantastic natural attributes with all the windows and natural light,” said Dino Di Sano, studio director of architecture and lead architect on the project. “We were looking to get as many people as we could next to the windows.” 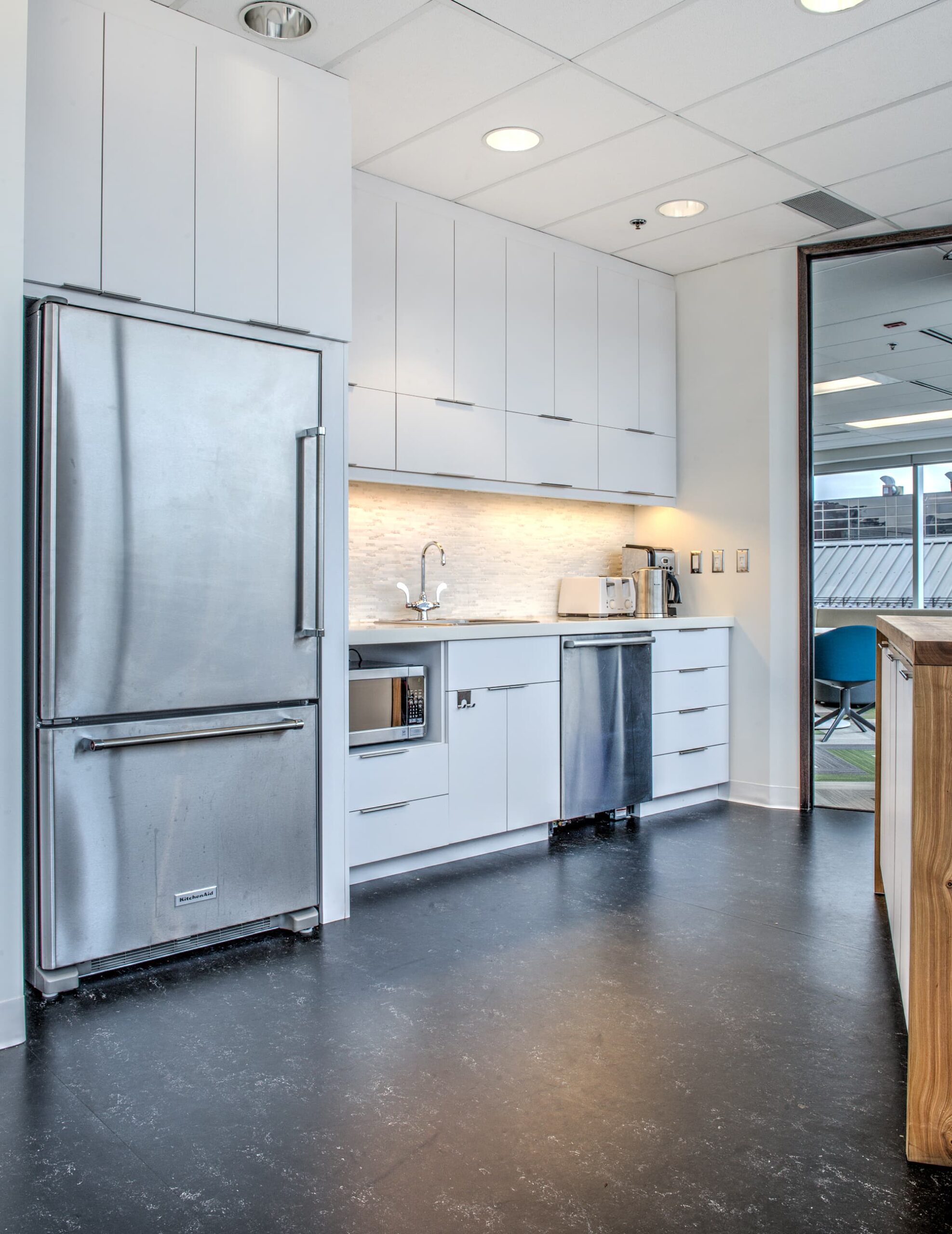 Di Sano and the team opened up the space. They leveraged some of the existing construction by keeping the lunch room, meeting room and enclosed offices, but cleared out the dividing walls and cubicles. This created bright, open-concept spaces for trendy open desks with low glass walls.

The architect team grouped modern sage green and blue armchairs to provide meeting areas and collaborative workspaces for employees and clients. They tied the office’s grey, green and blue accent walls together with a dramatic zigzag patterned green and grey carpeting. They made the large boardroom – with its spectacular
wall of windows and its glass ceiling – a focal point.

It was also an opportunity for suppliers to showcase their newest sustainable and energy-efficient products. The furniture, paint and carpets all met strict sustainability and end-of-life recycling standards. 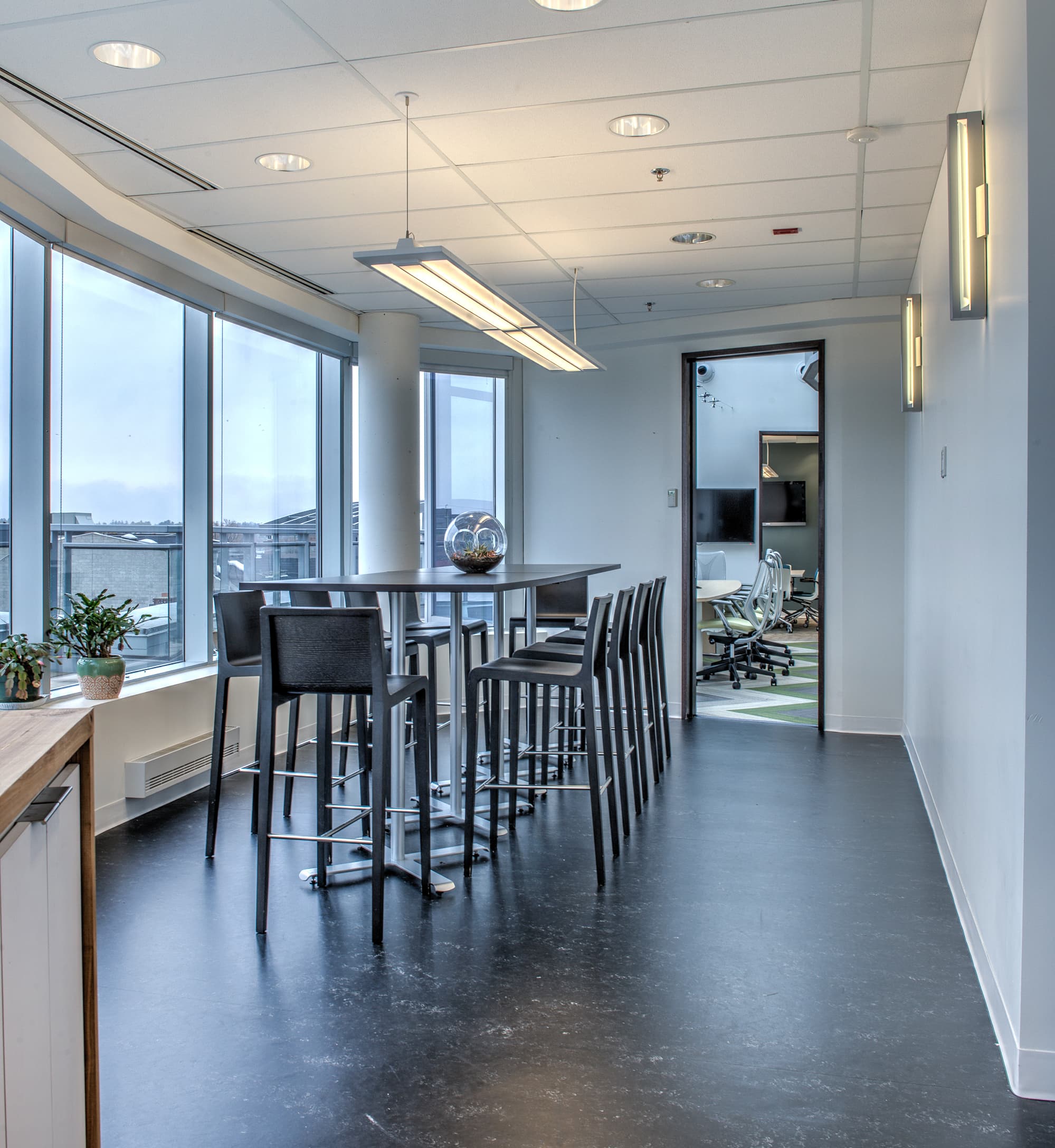 “We’re doing everything we can to minimize the impact on the environment as a whole, while ensuring we have a positive impact on employees,” said Whitred.

Di Sano likens LEED to the difference between buying regular vegetables and organic. It can be more costly up front, but energy savings and the benefits to employees’ health and well-being are ultimately cost savings.

“It is one of the nicest office spaces in Ottawa,” said Cole. “It uses materials that are highly touted in the industry as showcasing sustainability, which is becoming more and more important.”

Cole is proud of the work his firm has accomplished not only at the CaGBC, but with major projects across Ottawa in commercial and government buildings, offices and residences. 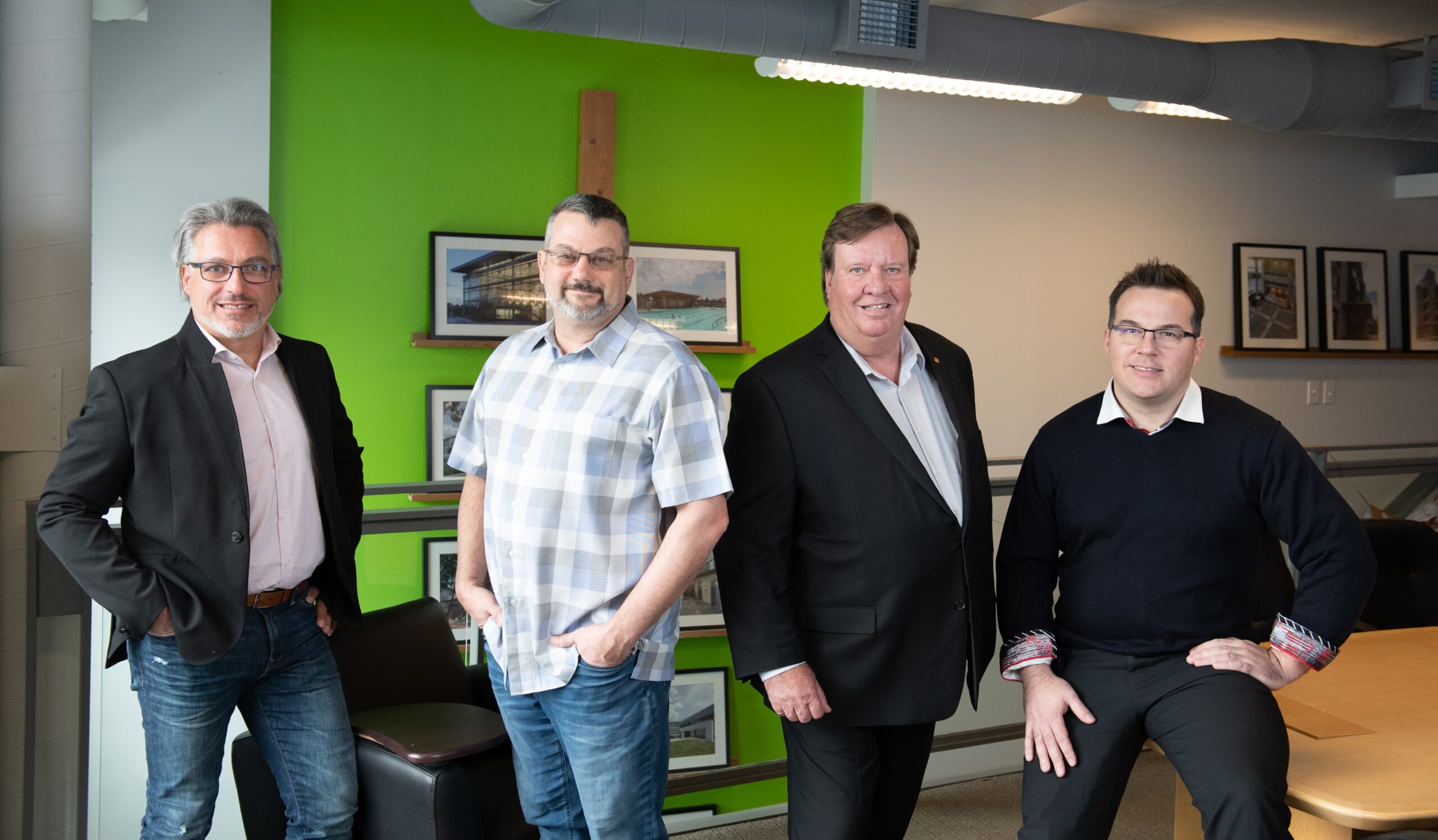 His history with the architectural firm dates back to 1986 when it was known as Helmer Stranks Cole Architects. The firm became COLE + Associates Architects in 1990 when the other two partners retired. Twenty-nine years later, Cole started considering his own retirement. The timing was right. IDEA, an architecture-engineering firm from Sault Ste. Marie, was interested in expanding to Ottawa.

“IDEA came with integrated engineering, which worked well in their market, and down here was only done by really big firms,”said Di Sano.